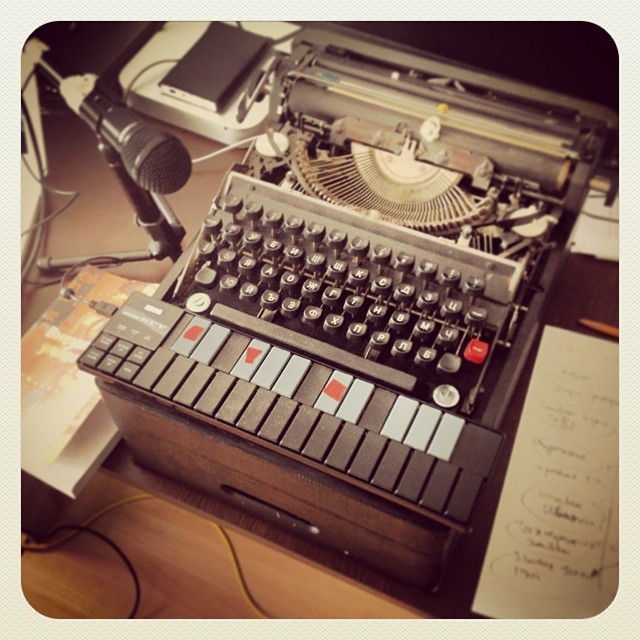 The performance Sudden Streets tells a story of happenstance, of unexpected meetings and their consequences. The performance is an improvisation based on the eponymous novel by Ivanka Mogilska. It uses a modified typewriter and a kalimba.

During the performance, we open the book at random pages and read a fragment. We record sentences, sounds and melodies, which are then played back, modified and manipulated to create an atmosphere in which the story unfolds. Each time the story is surprisingly different, with happenstance leading us where we need to go.

The first performance will happen at the occasion of the official release party of Mogilska’s novel Sudden Streets on Wednesday February 12, 2014 at 7pm, in cafe-gallery Synthesis, bul. Vasil Levski 57.

Choreographer Agata Maszkiewicz and digital artist Albena Baeva worked together for a month in Athens. During the research process Albena presented to Agata Runabout Project’s invention, the Mocapton. This is a motion-capture costume designed as Read more…

Azamen is a series of interactive dance performances that use a special pair of wireless sensor costumes that connect the movements of the two dancers with a computer. The bodies are thus turned into musical instruments that are capable of capturing sounds and words, playing them over and over again, modulating and transforming them until they create the perfect audio environment for their dance.

We live in a time when we have ever-increasing possibilities to talk, but ever decreasing chances to have a conversation, making it a real challenge to reach an audience through poetry. Presenting poetry in the Read more…