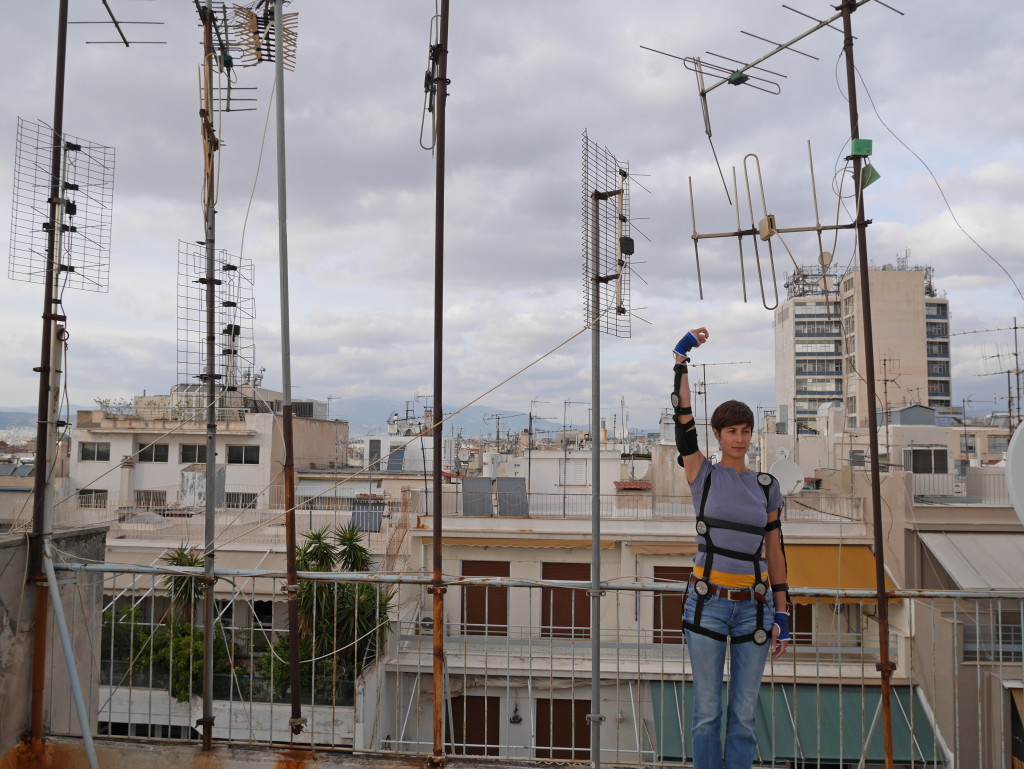 Choreographer Agata Maszkiewicz and digital artist Albena Baeva worked together for a month in Athens. During the research process Albena presented to Agata Runabout Project’s invention, the Mocapton. This is a motion-capture costume designed as a musical instrument for interactive dance performances. For almost a month the Mocapton was the center of their attention and became a modus vivendi of their artistic cooperation. The decision to focus on the costume itself determined the logic of the process. Daily routines, activities, order of experiments were designed by the Mocapton’s ‘needs and moods’. The idea was to first understand the system, its potential and eventual limits, before filling it with new projections, ideas and functions.

Facing the endless possibilities of ideas that started flowing, Albena and Agata concentrated on exploring different strategies for using the interface in any field. Some of the topics that came out of this challenging encounter was the relation between space, sound, movement and time, the impulse for movement and the possibilities of creating soundscapes.

As a result, after a 4 week research process, Mocapton had become more than an interface between bodies, sounds, images and movements. It became an interface between two different practices and universes of thinking, offering Albena and Agata a possibility of artistic exchange, self expression and identification.

Mocapton Monologues is a presentation of that research. It is a collection of incoherent impressions. It is a serie of different points of view. It is everything but not a performance. It is an answer to an impossible task of describing what happen in a one-month residency period between two artists in Athens.

The Athens residency is part of IDENTITY.MOVE!, which offers a transnational platform for theoretical and artistic research in the field of contemporary dance and related performing arts focusing on Eastern Europe. Participants in the project come from Bosnia and Herzegovina, Bulgaria, Croatia, Czech Republic, Germany, Greece, Hungary, Latvia, Lithuania, Poland, Romania, Serbia, Slovakia, Slovenia. The Bulgarian partner on this project is Derida Dance. IDENTITY.MOVE! is coordinated by the Goethe-Institut in Warsaw in cooperation with the Centre for Culture in Lublin, Obcanske sdruzeni Motus in Prague and the State School of Dance in Athens, and is supported by the Culture Programme of the European Union.

The performance Sudden Streets tells a story of happenstance, of unexpected meetings and their consequences. The performance is an improvisation based on the eponymous novel by Ivanka Mogilska. It uses a modified typewriter and a Read more…

Azamen is a series of interactive dance performances that use a special pair of wireless sensor costumes that connect the movements of the two dancers with a computer. The bodies are thus turned into musical instruments that are capable of capturing sounds and words, playing them over and over again, modulating and transforming them until they create the perfect audio environment for their dance.

We live in a time when we have ever-increasing possibilities to talk, but ever decreasing chances to have a conversation, making it a real challenge to reach an audience through poetry. Presenting poetry in the Read more…